In this article, Jon shares the mindset of a high performing team and offers some of their nuggets of wisdom. He also shares a tool the team is using to be even better prepared for the challenges ahead.

One of the joys I find in my role is how much I learn from our clients. In February 2020, I worked with a leader I’ve had the pleasure of knowing for many years. At that time, we were oblivious to what was just around the corner with the COVID shutdown. In conversations since, he’s shared how much that experience with Stop At Nothing helped him and his team negotiate the many challenges that have occurred over the last few years. I would like to thank him and point out that he and the team had been exemplary in following through on the agreements from our session.

In June 2022, we reconvened to assess his team’s effectiveness using our Stages of Group Development diagnostic tool which focuses on the four stages of team development. The tool examines behavior at three levels: systemic (more concrete outcomes—the what), interpersonal (how people work together to achieve the what—the how), and intrapersonal (the effectiveness of individual people).

This two-year-older team looked quite different from the team I worked with in early 2020: people had left, and others had been promoted. Interestingly, all the changes were the result of development moves within the company. The leader was looking to prepare the team for the challenges ahead and assimilate the new team members. He referred to it as “reloading, not rebuilding.“

What lay ahead was qualitatively very different from the obstacles of the past. Yes, COVID was still a consideration, as were issues with the supply chain—but now, revenue was a more significant focus, as was a slowdown in the economy and even the potential for a recession.

Before we got going on the first morning of the session, we all listened as the CEO and CFO shared their quarterly results and answered questions from analysts. When this was over, the leader, who ran an extensive line of business and reported directly to the CEO, encouraged questions from his team. One question was insightful and probed around a significant negative potential outcome for the company. The answer the leader gave was impressive. He acknowledged all the reasons for a possible adverse effect—and then presented the reasons for optimism using data and dispassionate analysis. This is something we refer to as realistic optimism.

Realistic optimism is the ability to acknowledge and accept reality while presenting and justifying a case for future optimism. Changes in the world and their impacts on business can sometimes seem bleak. One of the key responsibilities of leaders is to create an evidence-based case for hope and optimism for their organizations. Based on the team’s reaction to his answer, the leader successfully achieved this goal. Notably, this became the message and feeling that was cascaded to the company’s teams across the US.

As the meeting continued, the team began to plot their way forward. One of the team members, a keen off-road cyclist, shared a story: In a recent interview, a top-class cyclist was asked about his strategy for negotiating physical obstacles on mountain paths. The expert said the trouble with less-skilled cyclists is that when they see a rock, they focus on the rock. He, instead, focuses on the path around the rock.

This is a simple but brilliant insight, and it reminds me of something we teach in our programs at Stop At Nothing: focus on what you want, not what you don’t want. Recognize the reality of obstacles but once aware of them, move your attention to the path forward—which could be a business strategy or the route around a tree. I loved this metaphor and told him I planned to use it.

On a coffee break towards the end of the session, I was chatting with one of the team members about what had been accomplished and how it would help in the future. The team member brought up Second Order Thinking: When most people spend two days working on their team rather than working in it, they first think of the lost productivity – the first order impact. The second order impact will be catching up from being off the grid for a couple of days. But the third order impact is also there, and it’s the longer-term benefit of improved trust and relationships that will lead to the positive impact of an aligned approach to future challenges.

The point is that many people do not consider the long-term benefits and get waylaid by the obvious short-term downsides. The team member also recommended a book, The Great Mental Models by Shane Parrish, which I, in turn, now recommend to you. This concept, and many valuable others, are discussed in the book and are covered in the way of not what to think but how to think.

In the spirit of continuous improvement, the team finished the session by deeply assessing their team effectiveness using the Stages of Group Development tool, and they created an action plan with prioritized actions to take them to a new and higher level of functioning.

If you’re interested in completing this assessment for your team, download the tool and the exercise my client completed below. While the world will continue to present new challenges in the years ahead, improving the functioning of your team and applying some of these nuggets of wisdom will put you in the best possible position to respond. 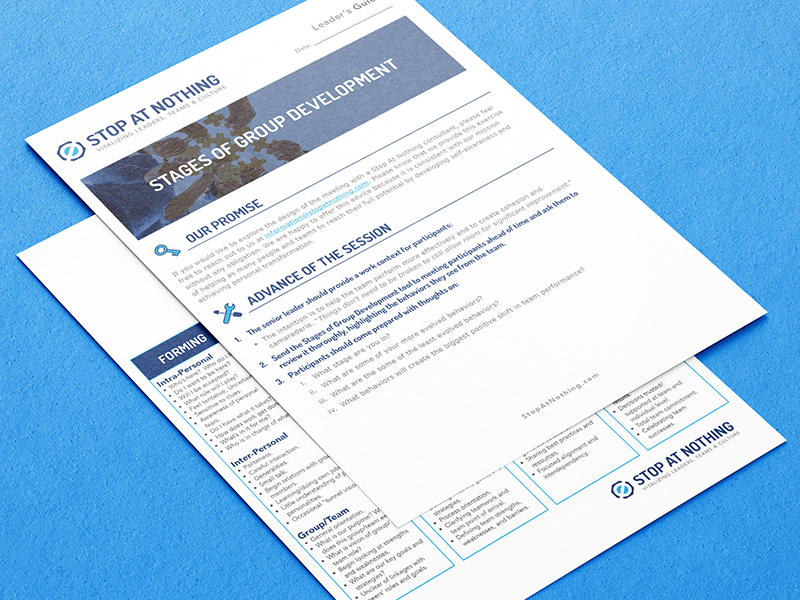 Download the Stop At Nothing Stages of Group Development Leader Guide to get started.

About the Author: Jon Patton

Jon combines more than a decade of experience with Stop At Nothing proven and proprietary methodologies and its unique approach to facilitator development, together with 3 decades at American Express leading large and complex organizations that allow him to apply a real life approach.