Will the Real Ted Lasso Please Stand Up: Lessons in Leadership

Will the Real Ted Lasso Please Stand Up: Lessons in Leadership

Being more effective as a leader is all about growing and learning. The current times are calling on leaders to balance the drive for progress with more demonstrable care for the people around us. In this blog post, Jon shares how to adapt your approach.

For those who haven’t watched the Emmy-winning comedy series Ted Lasso, the story is about an American football coach who moves across the pond to manage a fictional Premier League Football (soccer) team AFC Richmond.

The title character, Ted—who is unashamedly bereft of soccer knowledge—must handle the cynicism and sarcasm for which the British, myself included, are quite proud. His strategy of kindness, caring, and compassion seem doomed to failure but, over the course of the series, Ted begins to win people over. Ted Lasso isn’t really a series about sports, but a story about people and life’s challenges.

Ted Lasso reminds me of the real-life Premier League manager of Brighton and Hove Albion, Graham Potter. Brighton is my hometown and Graham Potter has intrigued me since he took the helm in May 2019. Potter has a master’s degree in Leadership and Emotional Intelligence and is often described as a “people person”. Former player Oli McBurnie illustrates this characteristic:

“He’s the best manager I’ve ever had on a personal level, by far. He cares so much about your well-being. Football is a results-based business and you’re almost seen as pieces of meat. He went the extra mile to help with things he didn’t have to.”

In a Guardian article—linked here for those who’d like to learn more about Potter’s philosophy and better understand the context of his achievements—the journalist describes him as “No quick fixes, no short cuts, a fierce intellect with a strong human touch: this is the Potter Principle, and you have to say it’s working out for him so far.”

In a press conference, Potter described his approach in this way:

“It’s a results business, we know that. But I started doing this job because you can make a difference, you can help people…I will look back on my life and I won’t necessarily look back on wins or results, I will look back on the people that I have worked with…they will be more important to me than anything else.”

What does this have to do with leadership?

Ted Lasso and Graham Potter embody what I have seen in other successful corporate leaders: they understand and take seriously their commitment to their organizations, but it comes hand-in-hand with their commitment to people. They understand results matter and that they must make hard decisions in the best interests of the organization—but, at the same time, they are passionately devoted to the wellbeing of the people in their charge.

Balancing both sides of this equation can cause inner conflict for leaders, but the absence of this friction leads to leading without humanity. At the same time, it’s important to acknowledge that running a results-based organization as a charitable function does not allow people to excel.

Here are a couple of examples from clients of mine who are channeling their inner Ted Lasso:

In his November 21 blog post, my colleague Ted Powell talked about the “Great Resignation.” This is a complicated issue that we will continue to address, but one thing is clear from all that we’ve learned over the last year: having leaders discover their inner Ted will allow organizations to create a more caring and supportive environment. This will create a competitive advantage for organizations in the fight to attract and retain talent.

How to adapt your approach

Most leaders I work with do care about their people, but often their results-driven behavior makes this imperceptible to the people around them.

I have two recommendations that will allow greater balance:

In this companion exercise, I share a gratitude protocol that was developed by Dr. Andrew Huberman, a professor of neurobiology at Stanford School of Medicine who hosts a podcast introducing people to science-based tools for everyday life. In his episode, The Science of Gratitude, he shares how to build a gratitude practice based on the current scientific research.

The full podcast can be seen here, but a key point to note is that this is quite different from the gratitude practices that most people come across on social media and other popular news sources. Dr. Huberman points out the far-reaching benefits of a gratitude practice, including cardiovascular health, better physical and cognitive performance, and greater resilience. It even produces a chemical reaction on par with those produced by interval training! These benefits can be gained by investing fewer than five minutes a day, three times a week.

Being more effective as a person is all about growing and learning. The current times are calling on us leaders to balance the all-consuming drive for progress with more demonstrable care for the people around us. If you recognize this need in yourself, I hope these suggestions will allow you to channel your own inner Ted Lasso or Graham Potter. 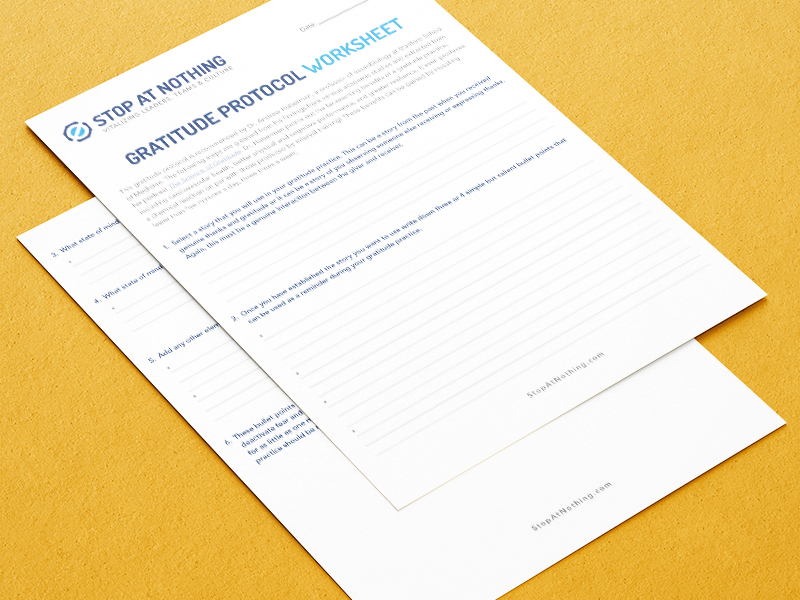 Download the Stop At Nothing gratitude protocol worksheet to take your next step.

About the Author: Jon Patton

Jon combines more than a decade of experience with Stop At Nothing proven and proprietary methodologies and its unique approach to facilitator development, together with 3 decades at American Express leading large and complex organizations that allow him to apply a real life approach.